Some time ago I wrote a post about fluxus, livecoding and 3D-prototyping system. Now I want to demonstrate some of its features and describe how you may use them in pseudo(;))scientific needs. For example, you can create a model of a simplified solar system and make it fit in only 125 lines of code (including comments) – it is the advantage of Racket language with graphic steroids, the core of fluxus and a descendant of PLT Scheme. Here how the result will look like: 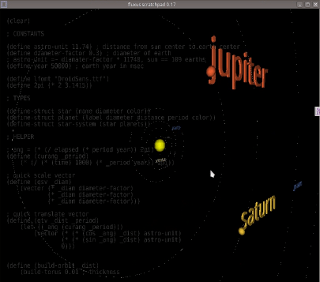 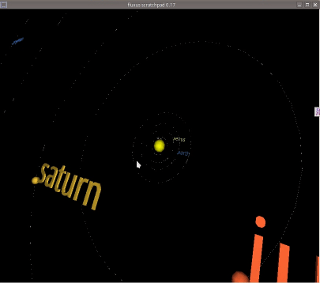 There are sources in the post, a short desription of code structure, tutorial movies in Slavic English, examining in detail the whole process of writing this complicated (;)) code.

Note: Since it was lost with the Poocoo, I’ll try to restore it from video.

Fluxus uses a term of state machine for scene construction. If you have programmed in OpenGL already, you are familiar with this principle - every next function in the code either modifies the matrix of scene state or changes the content of the scene (i.e. draws an object). You may construct the required scene objects just before any rendering will happen and then change their conditions later or just draw a new primitives in every frame (OpenGL understands that it may cache the objects which state is not changed a lot between frames). I am using the both ways of these, so I prepare the text labels and planets' orbits before rendering process but I draw planets in every new frame.

I have taken all the data about equatorial diameters, orbital radiuses and orbital periods of the planets from the single one table in Wikipedia article. It is very handy that all parameters are presented relatively to Earth properties (that is how astronomical units are calculated), so the Earth diameter and Earth year can be used as system of units in our model.

When we know this data, we can calculate the angles for planets positions (the orbital eccentricities are not taken in account in the model, it’s a homework) and place them appropriately in the model.